Where Do I Go Vote?

First, you are strongly encouraged to request an absetee ballot before Thanksgiving.  You can download the form at: https://sibreporter.net/2010/11/absentee-ballots/

If you like to vote in person, you can do so at your precinct.  All polls will be open as usual.  See Official Notice at: http://www.sibfl.net/pdf/10-11-02-election_results.pdf

Isaac Aelion credits his years of experience in Sunny Isles Beach affairs. Jeniffer Viscarra champions her background as an attorney and for having “independent judgment.”

Both seek Sunny Isles Beach’s Commission Seat 4, the South Central residential area, a seat held by Roslyn Brezin who is termed out.

The two candidates compete in a runoff election on Dec. 7.

Viscarra, 37, led the general election on Nov. 2 with slightly more than 37 percent of the vote compared to Aelion’s pull of nearly 36 percent of the 3,138 votes cast in a three-person race. Isaac Feldman finished in third place.

Since no one topped 50 percent, the city’s charter requires a runoff race.

Viscarra, a 10-year resident and attorney who specializes in immigration and family, believes the commission needs someone new.

“My entire living is based on critical thinking, that’s what I bring to the table. I bring independent judgement,” Viscarra said. “I don’t owe anyone any favors, I’ll evaluate each issue one at a time. I’m someone looking at everything carefully with [residents] in mind.”

Both candidates point to a hot button issue in the community: A proposed city-owned aquarium and park on the grounds of a strip mall near Collins Avenue and Sunny Isles Boulevard. Wometco, the Seaquarium’s owner, would finance construction of a $25 million aquarium and entertainment complex, which it would lease from Sunny Isles Beach.

Aelion said he isn’t ready to sign off on the project until traffic studies are complete but leans in its favor.

“The economics of it look sound,” he said. “It’s not going to cost one penny to the city to have this structure built. The city will get a $380,000 lease.”

Viscarra also is concerned with potential traffic issues and cites a lack of parking spaces. She hasn’t decided on the aquarium, either, “but based on what is out there so far, I would have to say no,” she said.

“My constituent’s big nightmare is this vision of bus loads of people being brought in. People don’t want that.”

Viscarra said the chief concerns in Sunny Isles, like elsewhere, are jobs, the economy, how tax dollars are spent and traffic.

“Creating shops and jobs is all good . . . but right now it doesn’t look like the feasibility studies are up to par,” she said. “…we don’t want to be on the oops end of a multimillion [dollar] project in the middle of 163rd Street.”

“I have a lot of respect for Norman,” Aelion said. “A lot of credit has to go to him and the commission in developing the city.”

Viscarra realizes the campaign was combative — “This is the nature of the beast” — but she said she could work with Edelcup and the commission.

“My primary responsibility is to the voters.”

We Could Not Do This Without You — Thank You Team! 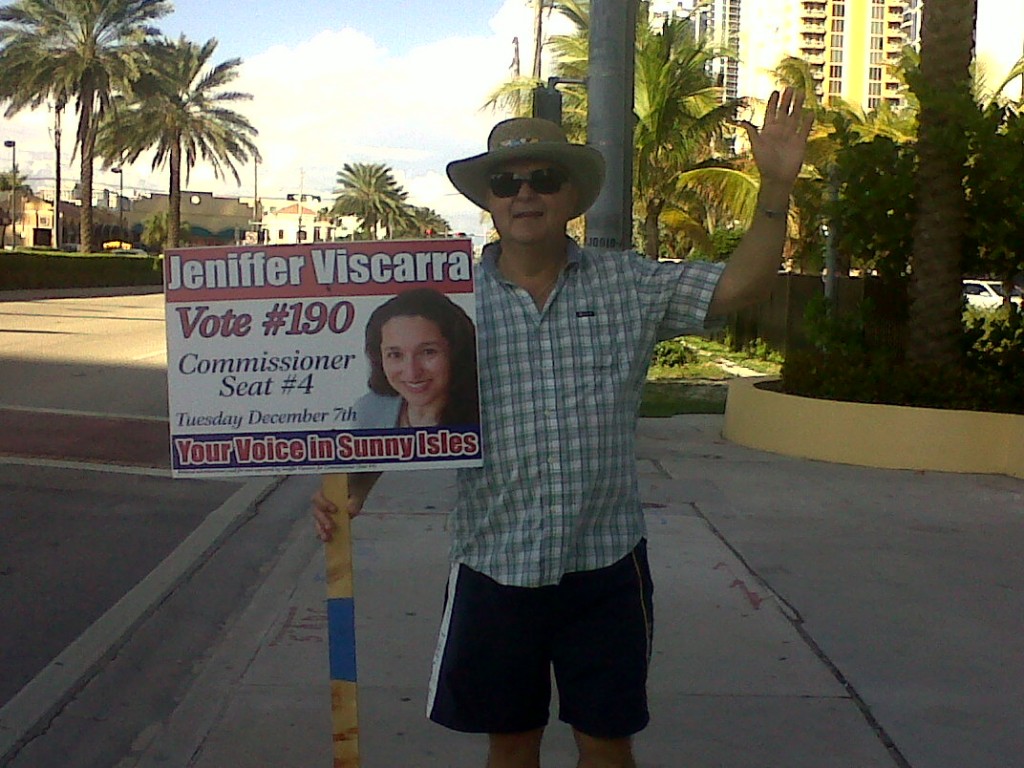 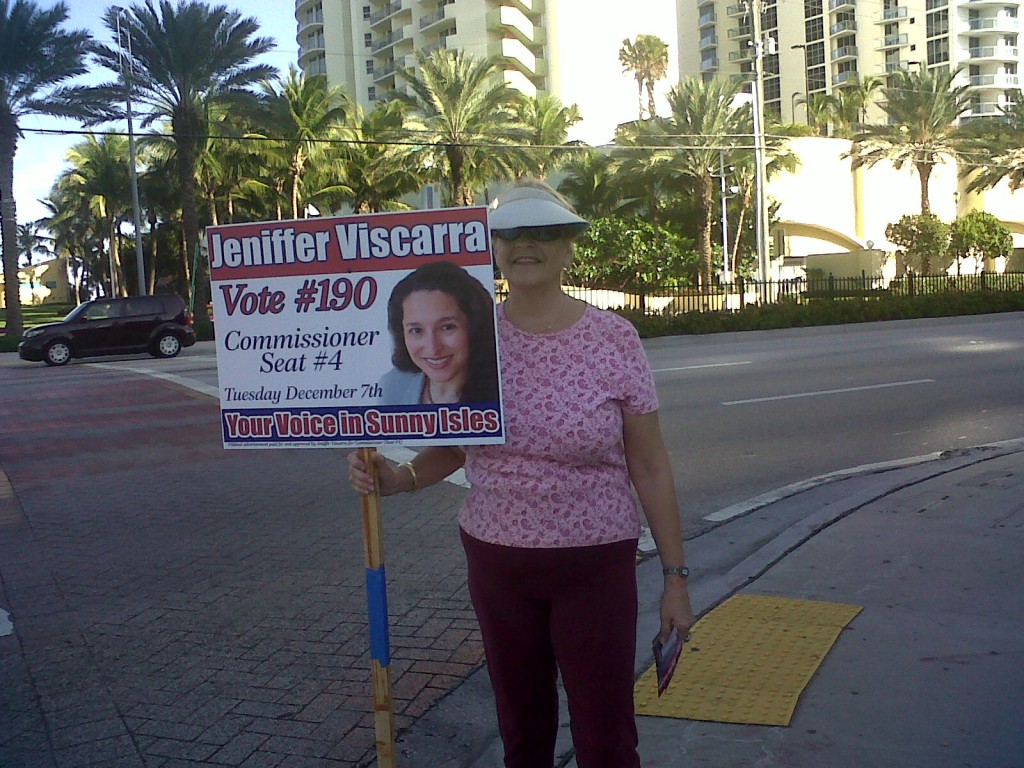 Aelion the Flip-Flopper: Chasing Votes At Any Cost

Please click on this link for posting: Aelion the Flip-Flopper

Our Signs Found in Dumpster

Several of our signs did not survive Thanksgiving.  Police found two tossed on the road and a group of them in a dumpster.  It’s a great thing we have devoted individuals looking out for us because  replacing these items is not only expensive, it takes time — which is in short supply.

PAY ATTENTION VOTERS!  If you stay home on December 7th, your interests will end up in the same place as our signs.  Is is YOUR RIGHT to have a fair and democratic process that allows you access to information about the two candidates and make an informed decision.  These tactics are meant to hurt me, BUT IT IS SUNNY ISLES WHO WILL ULTIMATELY PAY THE PRICE.

The Choice is Clear.  VOTE FOR JENIFFER VISCARRA ON December 7th.

In case you have not seen it….

Fighting The Good Fight With No Signs On Collins….Again

Last Thursday night, our signs went up and disappeared by Friday afternoon.  As such, our political signs were not seen the weekend of November 20th and we were left wondering what had become of them.  As noted in a previous posting, my opponent was seen at a site at the time that the signs were removed and it naturally raised our suspicion.  When confronted by two of our volunteers he noted that I had to have letters of permission to post the signs, which indicates two things.  1) He has been busy looking for ways to sabotage my campaign rather than engage in a fair democratic process.   2) He does not know or understand the election rules by which we are governed.   Had Mr. Aelion read the rules, he would know that a letter of permission is not required.  The City prefers that a letter be provided, but it does not have the authority to demand anything beyond what is set forth in the official election rules.  I know the City is aware of this distinction because they removed some of our signs in the previous election, and I made this same argument, which they had to concede.  Therefore, when Mr. Aelion told my volunteers that the City had removed my signs, I had difficulty believing it because I did not think that the City would have such a short memory.  But apparently it does.  After being invisible for the weekend, I recovered my signs from Code Enforcement, and they were put back on Collins Monday afternoon.

By Tuesday afternoon, the vast majority of the signs had disappeared once again.  I tried contacting the RK Office to check if I had been the victim of another mistake that conveniently benefits my opponent.  I thought perhaps RK maintenance, unaware that I had gotten permission from the owner and his son, might have mistakenly taken them down.  I was very disappointed to find that there was no mistake at all.  It seems Mr. Aelion, who is an RK tenant, called in a favor and requested that my signs be removed.   Consequently, RK went back on their word and took down the signs, which they have the right to do.  However, no one had the courtesy to call or email me regarding the decision, causing me to waste time at City Hall and filing police reports.  I do not begrudge RK protecting their interests, if that is what they think they are doing by breaking their vow of neutrality.  I resent that my volunteers’ hard work was undone by a man who claims that his life has always been about doing what’s right (this is a statement in one of Aelion’s mailings).  I guess for the next mailing he can edit that sentence to:  Everything in Isaac Aelion’s life has been about doing what’s right unless something else would benefit him more.

Throughout the campaign I have been asked my opinion of my opponent.  I always stated that he seemed like a nice guy, but that we differed on the issues.  I would not make that statement today.  After seeing his involvement with the conveniently anonymous mailings of the last election and his apparent inability to participate in a fair fight, it is clear that it is not our points of view that differ, but rather our moral fiber.  I actually have some.  And it is what keeps me focused and pushing forward.  If I truly want to be the people’s voice, I cannot be cheapened by politics as usual.  I will leave that to Mr. Aelion, who is clearly more interested in ascending to power than being an exemplary leader — yet another point on which we differ.

All that is necessary for the triumph of evil is for good men to do nothing. — Edmund Burke 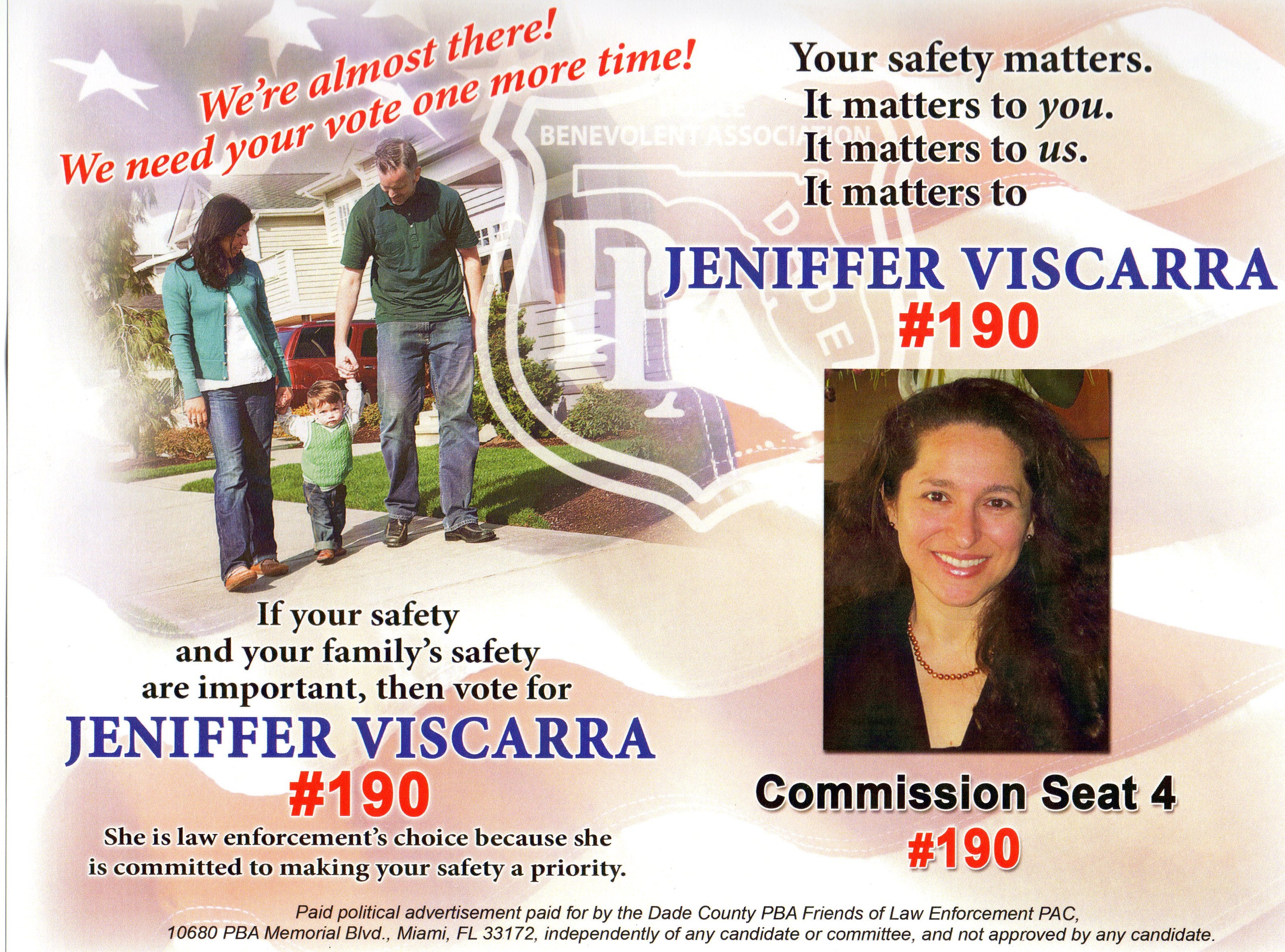 A Funny Thing Happened on the Way to Navarro

Campaign volunteers reported to us that on Friday afternoon, Nov. 19th they drove north on Collins Avenue admiring the new campaign signs for Jeniffer Viscarra that had just been placed that morning. There were 7 signs in all, strategically placed along Collins and permission had been given to post these signs. The volunteers shopped at Navarro for about 30 minutes. Upon leaving the store they noted that the signs by Navarro had “disappeared.” Stranger still, they noticed Jeniffer Viscarra’s opponent slinking away. When he realized he’d been spotted, he gave the volunteers (who he knew) a feeble wave and hurried across the street. The 2 volunteers followed after him and observed that he seemed “very uneasy” when questioned about the missing signs. We know that if you don’t actually catch someone “in the act” you cannot prove their guilt. But it does seem peculiar that all 7 of Jeniffer Viscarra’s signs disappeared in the 30 minutes our friends were in Navarro and that Jeniffer’s opponent was discovered “at the scene.” Message to the person who is guilty of removing these campaign signs – YOU ARE BREAKING THE LAW AND YOUR ACTIONS PROVE YOU ARE A CHEAT AND A SNEAK.

To our readers: We’d love you to help us solve the mystery of who the person is that stole Jeniffer’s signs. WHO do you think the sign thief is and what was the motive? Please let us hear from you – we hope you can help us solve this mystery(?).

Jeanette Gatto To Be Sworn in Thursday November 18th

We are very proud of Jeanette for winning the election for Commissioner Seat #2.  On Thursday November 18th she will be sworn in at City Hall at 6:30 PM.  Please click here for official agenda: http://www.sibfl.net/eventDetail.asp?eventID=127976

Hope you can make it!